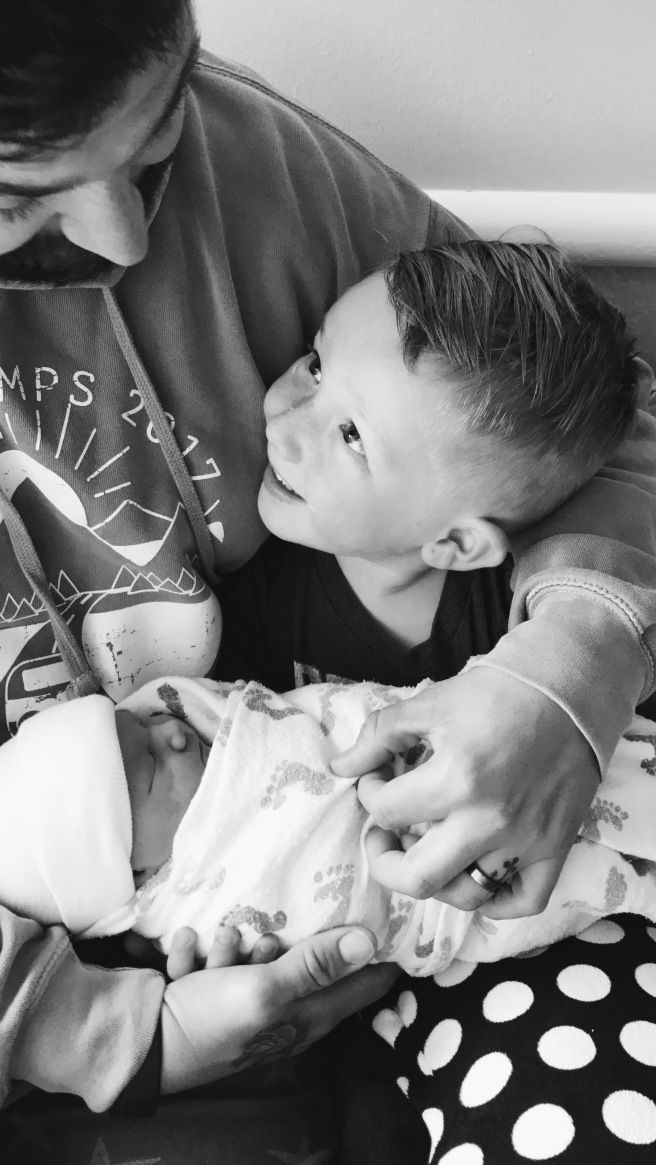 So as the days rolled by and I was coming close to our due date (September 4, Labor Day). I was figuring out ways to relax and give my body high levels of oxytocin, especially at night since I knew my body liked to go into labor at night (which is super common I guess!)—so lots of cuddles with the kids, James, shows that made me laugh or cry, long evening showers.. Two days before my due date, on Saturday, I woke up to consistent contractions, not super painful, but consistent. It was supposed to be the hottest day of summer so I was not looking forward to laboring like this. Around noon the contractions stopped. It went on to be the hottest day ever. Even at 8 in the evening, I was dripping sweat down the back of my neck.. EW. My theory is Emma knew she did not want to labor with me in this unpleasant state! I didn’t have any more contractions that day or the next morning/afternoon.

Then around 10:30pm on Sunday evening, they came.. these were the contractions I knew. Strong, consistent, oof.. the real thing. I started timing around 10:30pm on the dot and as soon as they came, I started making sure my bags were ready. They came every 3-5 minutes and they were progressively getting more intense. Over the next hour, each contraction felt like it was doubling on itself in intensity—this was happening fast! James had been ready at every ache or pain for the last two weeks, so I told him that this time I think we’re working on the real thing so he started getting his ducks in a row too.

I took a long shower right away and was instantly way relaxed. I was taking on each contraction in the bathroom because it just felt like the right spot. Since the kids were sleeping, I had a beach towel that I’d grabbed to stick my face into if I needed to be loud (and I did..). By 11:30pm, I knew that we’d need to go soon. It had only been ONE HOUR. But I knew that I didn’t want to endure these contractions in the car.. just no. By midnight, we were in the car and driving away. We called the birthing center slash hospital on the way and thankfully they had rooms available. We arrived and as quickly as we could, got upstairs and checked in.

The nurse checked me and I was 4 cm dilated but could be (sorry for this) stretched to a 5 (that totally grossed me out the first time I heard it and it’s my body ha). She continued to admit me and I was pressing through as much as I could with these INTENSE contractions. She also let me know she was going to be off soon so she wouldn’t be with me through this whole thing and she’d introduce me to the next nurse (not so fast my friend). I had my towel still (lol) and was being pret-ty loud, but man, they were weighty. Corrie was there pretty soon after we’d arrived so she and James had already began to help me make it through each contraction.

Meanwhile I was getting an IV in my arm (to my dismay.. former c-section protocol) and my stubborn veins caused me to get pricked SIX times before they got me set up. I’d went potty (pee) at some point and later, Corrie let me know she had thought my water had broken when I did that. Not long after, the doctor had popped in and as she was leaving, she’d asked if I’d said I needed to push or go number two and in that same breath, I was asking if I could go to the bathroom. In the next moment, I had the most intense urge to PUSH. So much so that I think they were worried this baby was going to splash out at my feet! Or at least I was! All I could think about was meeting our little girl! Once the doctor heard this and my urge to use the restroom, she got the nurses moving and everyone got into “let’s do this!” mode.

Mind you, it was probably around 1:20am, we’d only arrive fifty minutes earlier!! I’d uncomfortably gotten on the bed so she could check me and she said it’s a good time to push. My body didn’t feel like it wanted to quite as much once I was in the bed but the urge was still strong enough so with about 5 pushes (I believe..), I gave my all and WHOOSH, Emma made her debut! I forgot how incredible the body feels instantly!! We were in heaven. All I could say was “you’re really here!!”. I had forgotten the sweetness of that initial cry and the elation of seeing that precious tiny squished up face.

I still cannot believe how quickly everything had happened. My nurse (who was supposed to leave!) hadn’t even had the chance to admit me so as I’m holding my new baby, I was answering questions about if we have a cat in the house (lol). Our first few days were so sweet, and Emma has joined our family soooo well. Our kids have so much love for her. Kate cheers whenever she wakes up from a nap and Luke has these silent loving moments with her where he wants to hold her and just look at her. We’re all so in love.. I couldn’t ask for more. Love you little Emma!!

Oh yeah and in case that sounds too pristine, there’s a lot of spit up, poop and leaking boobies. Woop woop!

View all posts by Casey Mastrianna

Hi! I’m Casey. I live in Northwest Atlanta by way of the Bay Area with my husband James and our four babes Luke, Kate, Emma and Jordan. Here you’ll find my writings and thoughts on life—motherhood, home, autumn days, things that inspire, recipes, readings and most likely something ridiculous because that's my jam. How's that for a smorgasbord?